STORIES FROM THE SRI LANKAN WAR.

“Subramanian writes evocatively, conveying the curdled mood of a country” – The New Yorker

In the summer of 2009, the leader of the dreaded Tamil Tiger guerrillas was killed, bringing to a bloody end the stubborn and complicated civil war in Sri Lanka. For nearly thirty years, the war’s fingers had reached everywhere: into the bustle of Colombo, the Buddhist monasteries scattered across the island, the soft hills of central Sri Lanka, the curves of the eastern coast near Batticaloa and Trincomalee and the stark, hot north. With its genius for brutality, the war left few places and fewer people untouched.

What happens to the texture of life in a country that endures such bitter conflict? What happens to the country’s soul? Samanth Subramanian gives us an extraordinary account of the Sri Lankan war and the lives it changed. Taking us to the ghosts of summers past and to other battles from other times, he draws out the story of Sri Lanka today — an exhausted, disturbed society, still hot from the embers of the war. Through travels and conversations, he examines how people reconcile themselves to violence, how religion and state conspire, how the powerful become cruel, and how victory can be put to the task of reshaping memory and burying histories.

“This Divided Island” is a harrowing and humane investigation of a country still inflamed. 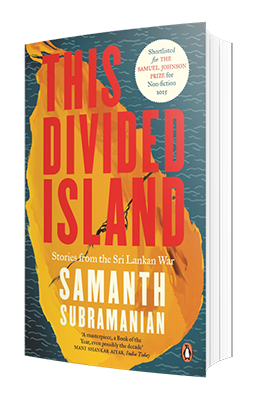 Praise for “This Divided Island”

“Subramanian writes evocatively, conveying the curdled mood of a country where the victorious state’s heavy-handed attempt to enforce a veneer of normalcy is challenged by the catalogue of losses remembered and recounted in many ‘fantastic or tragic or melancholic or even happy stories.”

“Brutal majoritarians and ruthless insurgents have long monopolised our sense of Sri Lanka. Samanth Subramanian’s sensitive account makes us aware of a missing human dimension. Exploring a war-ravaged landscape, he is bracingly alert to the role of ambiguity as well as ideology in human affairs. In This Divided Island, one of our finest young writers of non-fiction reveals the complicated lives lived in their shadow.”

“With the humility of a truly gifted writer, Samanth Subramanian sets out, not to find firm answers to the reasons behind Sri Lanka’s civil war, but rather to be changed and opened up by his journey through this war-ravaged land. His journey becomes ours. The things he discovers, the people he meets, haunts us long after we have closed the pages of this sensitive, poignant book.”

“This Divided Island – balanced, observant, good-natured, discursive and frequently witty – is a searingly angry and deeply moving portrayal of the agonies of this conflict, especially by the innocent Tamils caught in the middle of two ruthless forces… This is a major work, containing oral testimonies from all sides of the conflict, and will stand as a fine literary monument against the government’s attempt at imposed forgetfulness.”

“The book leaves us with a tantalising sense of the ambiguity of peace and victory: of the new and incongruous conservatism of Sinhalese Buddhism. Subramanian withholds judgment, but the precision of the final descriptions is searing.”

“It is here that Subramanian’s This Divided Island is a welcome read, very different from any other book written on this terrible chapter of human struggle. Slow-cooked over a number of years, meticulously constructed and with a passion and sympathy for Sri Lanka and her people, this Tamil Indian writer illuminates the central dilemma established midway through the book, and around which all hinges: What did it take for an ordinary, peaceable Tamil to commit to violence?”

“Samanth Subramanian tenaciously chases these moral complexities of the war in his book This Divided Island: Stories from the Sri Lankan War. The author wrestles with the motives of the staunch believers, the disenchanted renegades, and those who, caught in between, were unable to negotiate the validity of something for which they spent the better share of their lives fighting. His consistent tone of skepticism burns through the easily accepted truths about the war.”

Joe Felsenstein, professor emeritus of genome sciences and of biology, University of Washington

“There is only one word to describe this book: it’s a masterpiece, a Book of the Year, even possibly the decade. The writing is exquisite… Places and people come alive as the whole ghastly tragedy unfolds-mostly in their words, not his. He has an observant eye and a sharp ear, one recalling minute detail, the other lending authenticity.”

“This is narrative journalism at its most literary, diligently researched reportage presented with poetry and flair. Subramanian has an eye for an image, an ear for an anecdote and an affection for the absurd. His descriptions of the bullet-ridden flatlands of Jaffna are on point, as are his chilling interviews with war widows and ex-terrorists.”

“Like Philip Gourevitch’s account of the genocide in Rwanda, ‘We Wish To Inform You ThatTomorrow We Will be Killed With Our Families,’ this is a superbly reported book. But its closest literary compatriot is ‘Anil’s Ghost,’ Michael Ondaatje’s poetic yet utterly disturbing novel that was a response to the bloodbath that followed a violent Marxist uprising in the early 1970s in Sri Lanka and the then ongoing war with the Tamil Tigers.”