TRAVELS AROUND THE INDIAN COAST

“Vivid enthusiasm, intellectual curiosity and a delight in language.” – The Guardian

In a coastline as long and diverse as India’s, fish inhabit the heart of many worlds— food of course, but also culture, commerce, sport, history and society. Journeying along the edge of the peninsula, Samanth Subramanian reports upon a kaleidoscope of extraordinary stories. In nine essays, Following Fish conducts rich journalistic investigations: among others, of the famed fish treatment for asthmatics in Hyderabad; of the preparation and the process of eating West Bengal’s prized hilsa; of the ancient art of building fishing boats in Gujarat; of the fiery cuisine and the singular spirit of Kerala’s toddy shops; of the food and the lives of Mumbai’s first peoples; of the history of an old Catholic fishing community in Tamil Nadu; of the hunt for the world’s fastest fish near Goa.

Throughout his travels, Subramanian observes the cosmopolitanism and diverse influences absorbed by India’s coastal societies, the withdrawing of traditional fishermen from their craft, the corresponding growth of fishing as pure and voluminous commerce, and the degradation of waters and beaches from over-fishing. Pulsating with pleasure, adventure and discovery, and tempered by nostalgia and loss, Following Fish speaks as eloquently to the armchair traveler as to lovers of the sea and its lore. 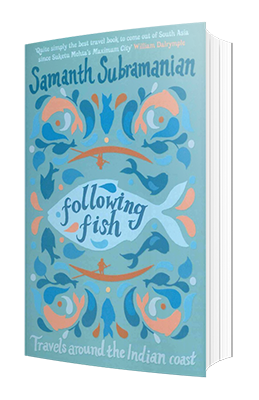 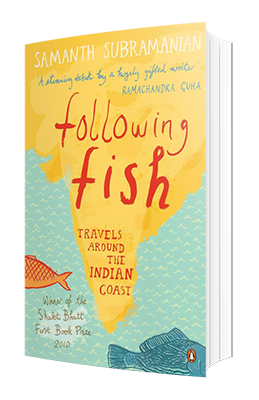 “This is a travel book like no other – inspired in its conception and marvelously skilled in its execution. Samanth Subramanian uses the production and consumption of fish to provide a series of arresting insights into the culture and ecology of the subcontinent. The prose is elegant but never lush, the tone warm and sometimes tender. A stunning debut by a hugely gifted writer.”

“Vivid enthusiasm, intellectual curiosity and a delight in language.”

“Subramanian’s sensibility is that of the textbook journalist—curious and empathetic, but unsentimental. His prose, however, is elegant, gently funny, and filled with startling images… He has a gift for evocative phrases and for offbeat insights.”

“This is not just good travel and food writing — as Samanth travels in search of hilsa in Bengal, toddy shop fish curry in Kerala, trawls through fishing communities and examines the live fish treatment for asthma in Hyderabad, he will revive your curiosity and your appetite.”

“Fishing, in this bonne bouche of a book, is revealed as the most elemental of activities, one ‘composed of water and air and light and space, all arranged in precarious balance around a central idea of a man in a boat, waiting for a bite.'”