THE RADICAL SCIENCE AND RESTLESS POLITICS OF JBS HALDANE. 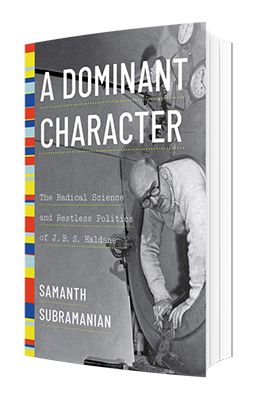 J. B. S. Haldane’s life was rich and strange, never short on genius or drama. He is best remembered as a geneticist who revolutionized our understanding of evolution, but his peers thought him a polymath. He foresaw in vitro fertilization, peak oil, and the hydrogen fuel cell, and his contributions ranged over physiology, evolutionary biology, and mathematics. Someone called him “the last man who knew all there was to be known.”

Beginning in the 1930s, Haldane was also a staunch Communist—a stance that enhanced his public profile, led him into trouble, and even drew suspicions that he was spying for the Soviets. It is the duty of scientists to think politically, Haldane believed, and he sought not simply to tell his readers what to think but to show them how to think. He wrote copiously on science and politics for the layman, in newspapers and magazines, and he gave speeches in town halls and on the radio, all of which made him, in his day, as famous in Britain as Einstein. Arthur C. Clarke called Haldane “the most brilliant science popularizer of his generation.” He frequently narrated aspects of his life: of his childhood, as the son of a famous scientist; of his time in the trenches in the First World War and in Spain during the Civil War; of his experiments upon himself; of his secret research for the British Admiralty; of his final move to India, in 1957.

Beautifully written and richly detailed, “A Dominant Character” unpacks Haldane’s boisterous life, and it examines the questions he raised about the intersections of genetics and politics—questions that resonate even more urgently today. 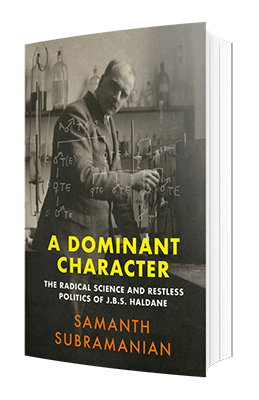 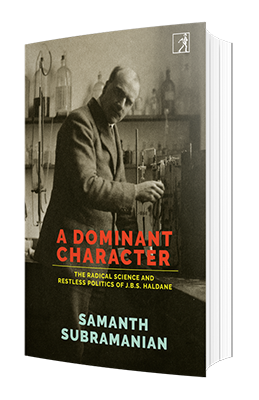 Praise for “A Dominant Character”

“Fascinating… A Dominant Character is the best Haldane biography yet. With science so politicized in this country and abroad, the book could be an allegory for every scientist who wants to take a stand.”

“Samanth Subramanian is a crisp, elegant writer who has produced a compelling biography of this dazzling man. A Dominant Character is perfectly paced… It can be read with the utmost pleasure by everyone who likes to admire a fine intellect in action and to see respect paid to outstanding intelligence.”

“Balanced and modern… [A Dominant Character] should prove engaging to readers interested in the birth of genetics and in the intersection of science and political belief.”

“Superb… Subramanian does a masterly job of summarising a rich and rough life… Haldane deserves a biographer who is eloquent, intelligent, fair, but unsparing and as good at explaining science as politics. Not an easy combination, but he has got one.”

“Balanced and modern… [A Dominant Character] should prove engaging to readers interested in the birth of genetics and in the intersection of science and political belief.”

“A wholly delightful, even brilliant, exploration of the scientific mind. Subramanian brings alive J. B. S. Haldane’s rollicking, unbelievable life journey from privileged English childhood to Indian asylum. He writes with grace and confidence about both the science and the man, a ‘Darwinian preacher’ whose life explains why scientists in our age of artificial intelligence and revolutionary genetics need to think politically. A Dominant Character is a captivating story of prickly genius, sexual scandal, and radical politics.”

“The twentieth-century British geneticist J. B. S. Haldane remains one of the most influential scientists of modern times. And this remarkable biography by Samanth Subramanian, which brings to life Haldane at his brilliant, unpredictable, outspoken, visionary best, will make you see exactly why his light still shines so brightly today.”

Deborah Blum, Pulitzer Prize–winning author of The Poison Squad: One Chemist’s Single-Minded Crusade for Food Safety at the Turn of the Twentieth Century

“A wonderful book about one of the most important, brilliant, and flawed scientists of the 20th century―that explains much not only about J. B. S. Haldane but about the complex times he lived in.”
~
Peter Frankopan, author of The Silk Roads

“A marvelous, comprehensive, and entertaining biography of J. B. S. Haldane, who made major contributions to many fields. His biggest impact was on evolutionary biology, as a major founder of the theory of population genetics. Subramanian has done impressive research on Haldane’s background, scientific contributions, and political controversies―this will be the definitive work on his life from now on.”
~
Joe Felsenstein, professor emeritus of genome sciences and of biology, University of Washington

“This is a rare biography that is about both a life of a figure of science and the milieu that nurtured him… None of this would work were it not for the lucidity of the writing, coupled with the hard work in as many as 18 archives worn lightly on Subramanian’s sleeve.”

“This book ought to be read not just because it sheds light on a fascinating twentieth century personality and his many contributions to science but because Haldane’s actions and the circumstances he faced forces the reader to ask questions that are extremely relevant for our society, politics, and quest of knowledge. These are questions that have been relegated to the background today.”

“Subramanian’s biography is an exquisite literary expedition… From the history of the development of biology to the Spanish Civil War, Subramanian skillfully mixes archival research and deep scrutiny of J.B.S.’ work to portray — what can be safely assumed — a breed of scientist almost impossible to imagine today.”